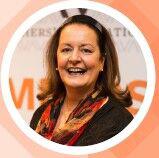 Rosalie says she encourages her audiences to think about things they haven't thought about before.