What exactly is the 4 Way Test 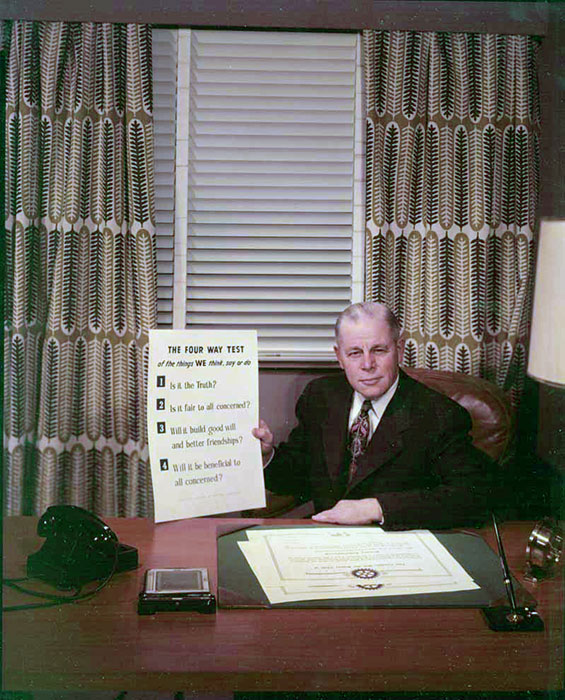 With tremendous obstacles and handicaps facing us we felt that we must develop in our organization something which our competitors would not have in equal amount. We decided that it should be the character, dependability and service mindedness of our personnel.

We determined, first, to be very careful in the selection of our personnel and, second, to help them become better men and women as they progressed with our company.

We believed that “In right there is might” and we determined to do our best to always be right. Our industry, as was true of scores of other industries, had a code of ethics but the code was long, almost impossible to memorize and therefore impractical. We felt that we needed a simple measuring stick of ethics which everyone in the company could quickly memorize. We also believed that the proposed test should not tell our people what they must do, but ask them questions which would make it possible for them to find out whether their proposed plans, policies, statements or actions were right or wrong.

Considerable time was spent in developing four short questions which now make up the Four-Way Test.  Here are the four questions:

I placed this little test under the glass top of my desk and determined to try it out for a few days before talking to anyone else in the company about it. I had a very discouraging experience. I almost threw it into the wastepaper basket the first day when I checked everything that passed over my desk with the first question, “Is it the truth?” I never realized before how far I often was from the truth and how many untruths appeared in our company’s literature, letters and advertising.

After about sixty days of faithful constant effort on my part to live up to the Four-Way Test I was thoroughly sold on its great worth and at the same time greatly humiliated, and at times discouraged, with my own performance as president of the company. I had, however, made sufficient progress in living up to the Four-Way Test to feel qualified to talk to some of my associates about it. I discussed: it with my four department heads. You may be interested in knowing the religious faith of these four men. One was a Roman Catholic, the second a Christian Scientist, the third an Orthodox Jew and the fourth a Presbyterian.

I asked each man whether or not there was anything in the Four Way Test which was contrary to the doctrines and ideals of his particular faith. They all four agreed that truth, justice, friendliness and helpfulness not only coincided with their religious ideals, but that if constantly applied in business they should result in greater success and progress. These four men agreed to use the Four Way Test in checking proposed plans, policies, statements and advertising of the company. Later, all employees were asked to memorize and use the Four-Way Test in their relations with others.

The checking of advertising copy against the Four-Way Test resulted in the elimination of statements the truth of which could not be proved. All superlatives such as the words better, best, greatest and finest disappeared from our advertisements. As a result, the public gradually placed more confidence in what we stated in our advertisements and bought more of our products.

The constant use of the Four-Way Test caused us to change our policies covering relations with competitors. We eliminated all adverse or detrimental comments on our competitors’ products from our advertisements and literature.

The application of the Four-Way Test to our relations with our own personnel and that of our suppliers and customers helped us to win their friendship and good will. We have learned that the friendship and confidence of those with whom we associate is essential to permanent success in business.

Through over twenty years of sincere effort on the part of our personnel, we have been making steady progress toward reaching the ideals expressed in the Four-Way Test. We have been rewarded with a steady increase in sales, profits and earnings of our personnel. From a bankrupt condition in 1932 our company has paid its debts in full, has paid its stockholders over one million dollars in dividends and has a present value of over two million dollars. All of these rewards have come from a cash investment of only $6,100, the Four-Way Test and some good hard working people who have faith in God and high ideals.

Intangible dividends from the use of the Four-Way Test have been even greater than the financial ones. We have enjoyed a constant increase in the good will, friendship and confidence of our customers, our competitors and the public and what is even more valuable, a great improvement in the moral character of our own personnel.

We have found that you cannot constantly apply the Four-Way Test to all your relations with others eight hours each day in, business without getting into the habit of doing it in your home, social and community life. You thus become a better father, a better friend and a better citizen.”